Composed by Dr. Robert Weyant, below are considerations for dental clinicians during the COVID-19 outbreak for aerosol production.

Below are quotes from various studies:

There are at least three potential sources of airborne contamination during dental treatment: dental instrumentation, saliva, and respiratory sources, and the operative site. Most dental procedures that use mechanical instrumentation will produce airborne particles from the site where the instrument is used. Dental handpieces, ultrasonic scalers, air polishers, and air abrasion units produce the most visible aerosols. Each of these instruments removes material from the operative site that becomes aerosolized by the action of the rotary instrument, ultrasonic vibrations or the combined action of water sprays and compressed air. (Pippin et al, J Oral Max Surg 1987)

Use of surgical face masks has been advocated to protect clinicians from inhalation of aerosols containing organic and inorganic particulates. This study examined the ability of a 22 μm tracer particle to bypass the filtering capability of face mask material by peripheral marginal leakage of inspired air. For two popularly used face masks taped to a facial moulage, recovery of the tracer particle by an in vitro system was very low. When the masks were placed in the manner in which the product is commonly worn, however, significantly higher numbers of particles were recovered. Passage of inspired air around the periphery of two types of face masks appears to circumvent the masks’ ability to screen airborne contaminants. https://www.joms.org/article/0278-2391(87)90352-1/pdf (Micik et al. JDR, 1969):

Aerosol particles usually are less than 50 microns in diameter, are invisible, and remain airborne for long periods. Under the conditions of this study, dental procedures incorporating the use of water sprays or rotary instruments generated aerosols with significantly greater numbers of bacteria than were produced by all the oral activities surveyed. It appears appropriate to modify certain dental procedures or to use devices or technics such as special high velocity air suction, that will reduce microbial aerosol production or dispersion during those procedures to levels comparable to those produced by group 1 oral activities such as breathing or speaking. (Bauman et al.  J of Multidisciplinary Care 2018)

Aerosols are differentiated based on particle size: splatter (> 50 µm), droplet (≤ 50 µm), and droplet nuclei (≤ 10 µm). In dental settings, 90% of the aerosols produced are extremely small (< 5 µm).  Splatter, being the larger particle, will fall until it contacts other objects (e.g., floor, countertop, sink, bracket, table, computer, patient or operator).  Droplets remain suspended in the air until they evaporate, leaving droplet nuclei that contain bacteria related to respiratory infections.  Droplet nuclei can contaminate surfaces in a range of three feet and may remain airborne for 30 minutes to two hours.  Ultrasonic scalers and high-speed handpieces produce more airborne contamination than any other instrument in dentistry. https://decisionsindentistry.com/article/transmission-precautions-for-dental-aerosols/ (Bauman, J Hospital Infection, 2006)

Significant contamination of the operatory occurred at all distances sampled when high-speed instruments were used (mean 970 colony-forming units/m2 /h). The bacterial density was found to be higher in the more remote sampling points. The area that becomes contaminated during dental procedures is far larger than previously thought and practically encompasses the whole room. These results emphasize the need for developing new means for preventing microbial aerosols in dentistry and protection of all items stored temporarily on work surfaces. This is especially important when treating generally ill or immunocompromised patients at dental surgeries in hospital environments (Harte. JADA, Vol. 141 2010)

Because surgical masks protect the mouth and nose only from splashes, spray and spatter from large-particle droplets and not the smaller aerosol particles, they cannot be used when Airborne Precautions are indicated. When breathing with a surgical mask in place, much of the inhaled air comes in around the sides of the mask, along with airborne organisms. According to CDC’s 2007 isolation guideline, HCP should don fit-tested N95 respirators approved by CDC’s When HCP use respirators while treating patients with diseases requiring Airborne Precautions, they should use the respirators in the context of a complete respiratory protection program. This program should include training and fit testing to ensure an adequate seal between the edges of the respirator and the wearer’s face. (Harrel and Molinari, JADA 2004)

As noted previously, if the ADA’s recommendations for sterilization of instruments and treatment of water lines are followed, these major sources of potentially contaminated dental aerosols can be controlled. However, it should be recognized that the aerosol created by the interaction of coolant water and ultrasonic vibrations or by compressed air and rotary motion is visible to patients and dental personnel. It is important that this aerosol cloud is controlled to the greatest extent possible to reassure patients and dental personnel. It also should be recognized that contaminated aerosols are produced during dental procedures when there are little or no visible aerosols. As has been shown in the study of aerosol production by ultrasonic scalers when no coolant water was used, even in the complete absence of coolant water there is aerosolization of material from the operative site. During routine dental treatment, there is a strong likelihood that aerosolized material will include viruses, blood, and supra- and subgingival plaque organisms.

At this time, it is impossible to determine the exact infection risk represented by aerosolized material. The potential for the spread of infection via an almost invisible aerosol, however, must be recognized and minimized o eliminated to the greatest extent feasible within a clinical situation.

The use of personal barrier protection such as masks, gloves and eye protection will eliminate much of the danger inherent in splatter droplets arising from the operative site. However, any infectious material that is present in a true aerosol form (particles less than 50 μm in diameter) or splatter that becomes re-airborne as droplet nuclei have the potential to enter the respiratory tract through leaks in masks and contact mucus membranes by going around protective devices such as safety glasses. A true aerosol or droplet nuclei may be present in the air of the operatory for up to 30 minutes after a procedure. This means that after a dental procedure if the operator removes a protective barrier such as a face mask to talk to a patient when a procedure is completed, the potential for contact with airborne contaminated material remains. Also, there is a potential for an airborne contaminant to enter the ventilation system and spread to areas of the facility where barrier protection is not used.

During many dental procedures, the use of a rubber dam will eliminate virtually all contamination arising from saliva or blood. If a rubber dam can be used, the only remaining source for airborne contamination is from the tooth that is undergoing treatment. This will be limited to airborne tooth material and any organisms contained within the tooth itself. In certain restorative procedures such as subgingival restorations and the final steps of crown preparation, it often is impossible to use a rubber dam. The use of a rubber dam also is not feasible for periodontal and hygiene procedures such as root planing, periodontal surgery, and routine prophylaxis. This is of particular concern owing to the fact that periodontal procedures always are performed in the presence of blood and instruments such as the ultrasonic scaler, which has been shown to create the greatest amount of aerosol contamination, are used.

From a practical point of view, it is easiest to remove as much airborne contamination as possible before it escapes the immediate treatment site. The use of a high-volume evacuator, or HVE, has been shown to reduce the contamination arising from the operative site by more than 90 percent

It must be emphasized that no single approach or device can minimize the risk of infection to dental personnel and other patients completely. A single step will reduce the risk of infection by a certain percentage, another step added to the first step will reduce the remaining risk, until such time as the risk is minimal. This can be described as a layering of protective procedures. This layering of infection control steps needs to be followed in reducing the potential danger from dental aerosols. 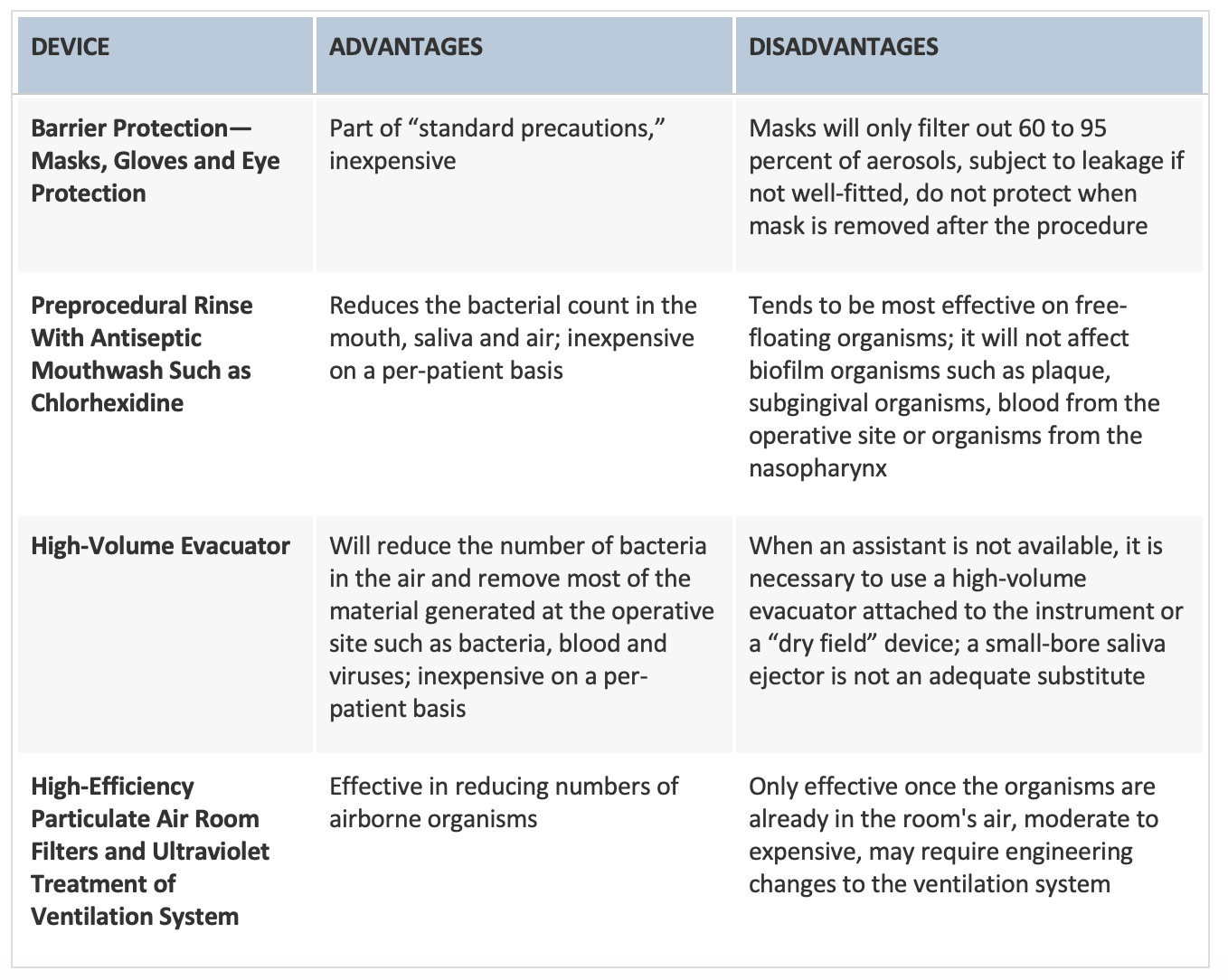 Annaliese Cothron is the Executive Director of The American Institute of Dental Public Health. You can reach her at cothron@aidph.org.